skip to main | skip to sidebar

The Master of Black and White Photography

(Feb.20 1902-April 22 1984)
American Photographer.
He trained as a musician and supported himself by teaching the piano until 1930. He became involved with photography 1916 when his parents presented him with a Kodak Box Brownie camera during a summer vacation to Yosemite National Park. 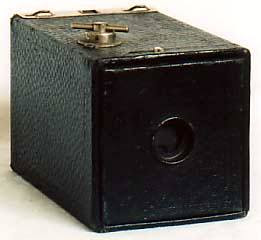 In 1917-18 he worked part-time in a photo finishing business. From 1920-27 he served as a custodian of LaConte Memorial in Yosemite the Sierra Club's headquarters. His duties included weekly expeditions thru the valley and rims during which he continued to photograph the landscapes. He considered his snapshots of Yosemite and the Sierra Nevada Mountains, taken during the early twenties to be a visual diary, the work of an ardent hobbyist. In 1923 he used a Korona 6 1/2 * 8 1/2" view finder camera on his pack trips and in 1927 he spend the afternoon making one of his most famous images Monotith, the Face of Half Dome, Yosemite Natonal Park, Adams planned his photography, waited for the exact sunlight he desired and used a red filter to darken the sky against the monumental cliff. He later refered to his image as his first visualization of the subject, not as it appeared in reality but how it felt to me and how it must appear in the finished print. 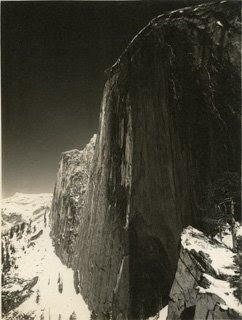 Monolith, the face of half dome 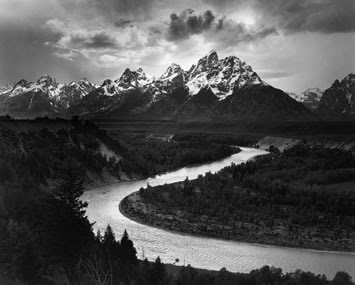 Teton And the Snake River 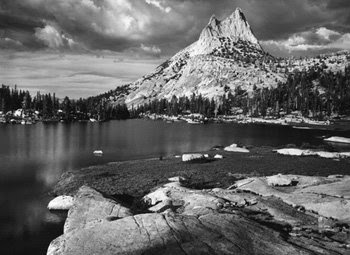 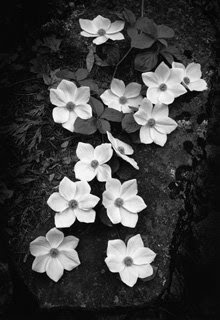 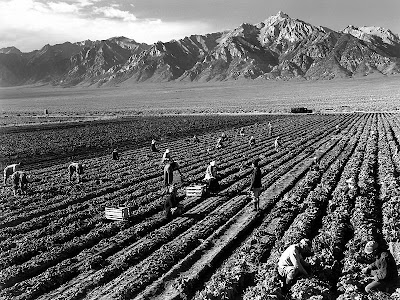 Farm workers in Manzanar War Relocation Center. Mt. Williamson in the background. Manzanar is well known for being one of the 10 site where over 110,000 Japanese American were imprisoned during WWII. 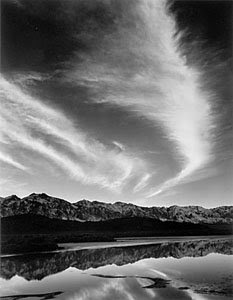 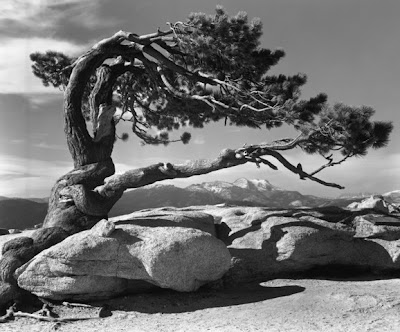 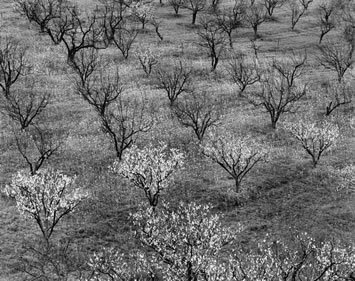 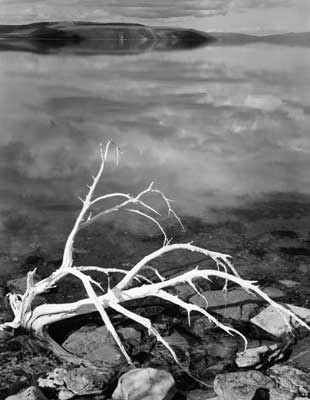 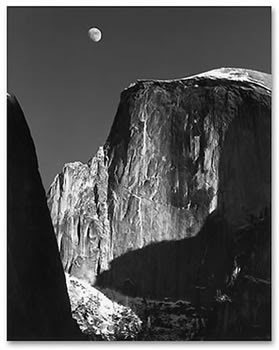 Moon and Half Dome

In 1968 Ansel Adams was awarded the Conservation Service Award, the Interior Dept. highest civilian honor " in recognition of your many years of distinguished work as a photographer, artist, interpreter and conservationist, a role in which your efforts have been of profound importance in the conservation of our great natural resources."
Adams was often criticized for not including humans in his photographs and for representing an idealizing wilderness that no longer exists. However, it is in large part thanks to Adams that these pristine areas have been protected for years to come.
Why was Ansel Adams revered by Americans like no other artist or conservationist has been? William Turnage explains " More than any other influential American of his epoch Adams believed both in the possibilities and the probability of humankind living in harmony and balance with it's environment.

For more on his biography click HERE
Art Encyclopedia from Answers.com
http://www.anseladams.com/
www.sierraclub.org/history/anseladams/

Hope you enjoyed reading about a man I've admired for as long as I can remember. Please take the time to visit your parks and nature preserves or even just taking a walk in the woods and explore the wonder that is out there.
Oh and don't forget to bring your camera........so we can all see what you discover too.
We don't all need to be an "Ansel Adams" to inspire each other.
Have a
Happy Black and White Sunday
hosted by Anne Marie (who always inspires me)
from Na Da Farm Life
Thanks for coming by and feel free to leave a comment!
I'd love to here from you.
Carole
Posted by Carole at 8:00 AM

oh Carole, this post was dreamy.........his talent and conservation efforts are what pushed me into the field I studied......he was a genious

have a great Sunday~

Carole, Carole. What a stunning post and what a photographer!! He certainly had a gift like no other. His ability to transport you to another world has had me fascinated for many years. I remember the first time I saw his work I was in awe. Thank you for this fascinating insight into a true genius. Would love to have the little box brownie also!! Have a great Sunday! x Julie

oohhh.......yes...ansel adams! wonderful post. i found some "box brownies" at the flea market last weekend which totally tempted me ($13 a piece) didn't know what to do with them though? these photos are soooo inspiring. thank you. "humankind living in harmony and balance with it's environment"...yes, yes, yes! my mantra. thanks for visiting my blog and yes that is penstemon, husker red. love its dark stems in contrast with the white blooms. happy sunday to you. erin

Faboulous post! I adore b&w photographs! Thanks for sharing these wonderful ones!
Happy new week!
Vale

What a gorgeous post. I have always loved Ansel Adams, his work is dreamy and thoughtful. I hiked up half dome, and it was amazing, but I'd never do it again because it was too scary! Thanks for the lovely post Carole.
Take care,
Martha

What a shock,that you too love his work..I had one of his prints in my very first apt.back in 1983....go figure!!Hope you are well my friend,Chrissy

Loving Ansel Adams photos is almost a requirement living here so close to Yosemite.
The half dome photos are my favorite. My dad, my aunt, and I took a 3 day backpacking trip up Half Dome when I was 10. I got scared half way up the cables (up the back side) and had to back down. My dad had to go on up because my aunt was ahead of us. The view from the base of the cables was stunning enough. I didn't need to go all the way to the top!
Dawn

Here I am in Carmel - the land of Ansel Adams. So your posting really hit home with its beauty and majesty!

I am a new follower, and love your blog.

Marjorie
P.S. I just bought a collection of lp records that belonged to AA. 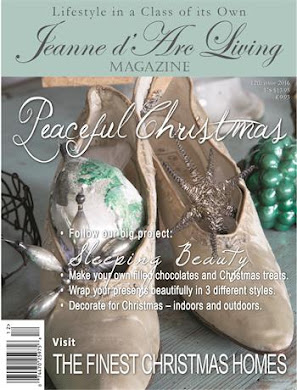 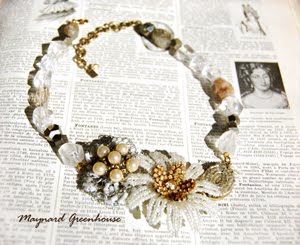 " Time is a companion that goes with us on our journey.
It minds us to cherish each moment,
because it will never come again."
Cpt. Jean-Luc Picard

Carole
Thank you for stopping by. I hope you enjoy your stay while I share my life on these pages. A little this and a little that. 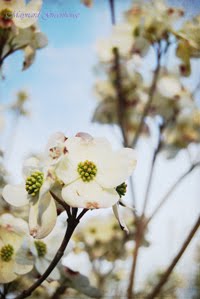 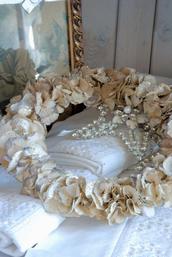 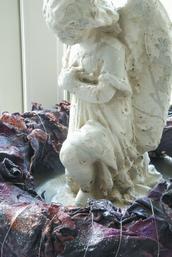 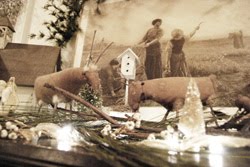 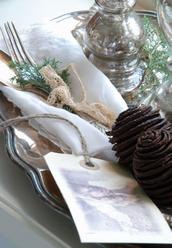 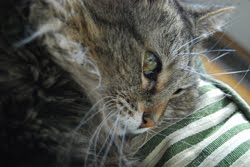 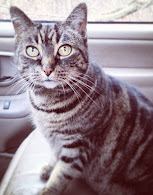 Blogs from far away lands